This three-year research project examined the best ways to develop character strengths and virtues in adolescents, whether extracurricular activities impact teens’ lives in positive ways and increase certain virtues such as patience and self-control. The study—the first of its kind to be focused on youth—allowed our research team to conduct an experimental study with adolescents in the greater Pasadena area, as well as with those who trained for Team World Vision’s half-marathon; develop a youth-focused smartphone application to promote character development; and propose additional studies that will bring together scholars and youth professionals.

Our research team scientifically tested the types of contexts that can promote or hinder character strength development, as well as the most impactful ways to frame character and virtue development activities when presenting them to adolescents. The phone app, CharacterMe—used during the 2015-2016 research phase—played an important role in collecting this research data by helping adolescents improve patience and self-control in their daily lives, which our researchers hoped would be helpful for teens and would encourage others to develop technology to help teens live healthier lives.

At the end of the grant, the research team’s aim was to have an increased understanding of what tools and interventions successfully promote character virtues in youth (particularly those in sports); to engage other researchers in exploring important questions about sports; to create additional useful technology that can improve the lives of youth; and to better understand the role of spirituality and religion in positive youth development.

Thrive Center faculty and students have also brought this research to lay audiences of athletes, coaches, and parents through various community talks. Our research team has built connections with Hope Sports, Fuller Youth Institute, USA National Junior Swimming, Nashville Coaching Coalitions, IMG Academy, local high schools, elite sport clubs, and several university sport programs. These connections are producing an unanticipated result: considerable impact on the elite athletic community, especially through Dr. Houltberg’s presentations to Olympians, professional athletes, and elite-level coaches. This impact may be highly strategic in changing the zeitgeist of elite athletics, which can trickle down to produce a broad, long-term impact in the culture of youth and college-level sports.

CharacterMe App: A Better Training App for Your Character 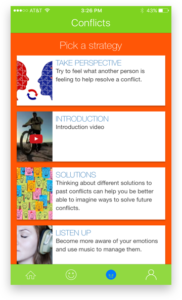 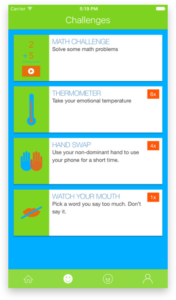 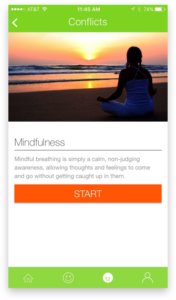 We developed the CharacterMe app (Fuller designer & Curly Robot, LLC) to make data collection fun for youth research participants. The app was built around activities that teach youth to name and regulate their emotions throughout the day.

About 480 adolescents were recruited to engage in a two-week self-control and patience intervention. Participants were randomly assigned to different versions of the app in which the language and framing of the activities emphasize how building strengths (or fixing weaknesses) will help them connect with something bigger than themselves (e.g., God; spiritual condition), will help them become a better person (moral condition), or will help them do better in school and athletics (instrumental condition). We tracked the adolescents’ self-reported character from before they began the intervention through six months after they completed it. Ratings of the adolescents’ virtues from parents, friends, coaches, and teachers were also collected as way to evaluate whether there was true change.

The early data was promising: use of CharacterMe helped teens understand and better handle their feelings. Our hypothesis is that the spiritual framing will lead to greater and longer-lasting development of patience and self-control.

This study was made possible through a generous grant by the John Templeton Foundation.