DACA recipient, Norma Ramírez joins Conversing with her mentors, Pastor Sonia Luginbuhl and Dr. Lisseth Rojas-Flores to talk about growing up undocumented and about her experience as a Fuller PhD student under the DACA policy (Deferred Action for Childhood Arrivals).

This podcast was originally published by Conversing at FULLER Studio.

Dr. Lisseth Rojas-Flores is an Associate Professor of Clinical Psychology at Fuller Theological Seminary. Her primary research interests focus on trauma, youth violence prevention, and the quality of parent-child relationships and overall well-being of children and parents living in low-income immigrant families in the United States. She takes a special interest in addressing the interrelationships between family, mental health and social justice issues. Learn more about Dr. Rojas-Flores work.

Born in Iguala, Guerrero, Mexico, Norma Ramirez is DACA recipient and Doctoral Candidate in Clinical Psychology at Fuller Theological Seminary. It wasn’t until attending graduate school that she realized crossing the border was a traumatic experience that continues to shape every part of her life. Ramirez is both an advocate for her therapy clients within the system and an activist in the greater socio-political context for Latino/a immigrant youth and families. 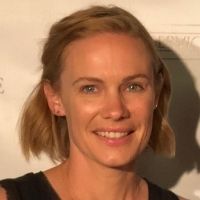 Sonia Luginbuhl is an Associate Pastor at Mountainside Communion, a Church of the Nazarene. She studied theology and intercultural studies at Westmont College and Fuller Theological Seminary. Her emphasis for the Master of Arts was mission and migration, as a response to the 2003 United States invasion of Iraq, which was the context for her work among the refugee communities in the migration intersections of Athens, Greece and Istanbul, Turkey.  She has remained actively involved in the immigration narrative(s).